26/03/2018 5047 0
Dinh Cau shrine (local people called Long Vuong shrine) was built almost a hundred years ago to pray for the gods to protect the fishermen to go to sea, bless the family.

Dinh Cau Temple, sacred destination can not be ignored when traveling to Phu Quoc.

Located a few hundred meters west of Duong Dong town, Dinh Cau is located on a rocky stretch of the sea, three waves surf. This is a symbol of spiritual and tourism of Phu Quoc

Dinh Cau shrine (local people called Long Vuong shrine) was built almost a hundred years ago to pray for the gods to protect the fishermen to go to sea, bless the family. The most recent renovation in 1997, this shrine is associated with many fascinating anecdotes, stimulating the curiosity of visitors to Phu Quoc tourism

After climbing 29 narrow stone steps, rugged to Dinh Cau temple, tourists rest on the stone row at the foot of the shrine, next to the coast

During the day the weather is very hot so it is quite deserted. In the afternoon, the sea breezes, tourists, local people often focus here fun

Dinh Cau beach rocks, not suitable to bathe clear water. Walking around the beach, sometimes catching plastic bags, plastic bottles ... by the lack of consciousness thrown into the sea. Currently, Phu Quoc is trying to overcome the situation

Stone embankment is designed to reduce the large waves hit the rocks, as well as anchor the boat. This place is very strong wind but is the ideal wedding venue

Previously, Dinh Cau night market is famous for a few hundred meters. However, at the end of July 2016, Phu Quoc closed this market to rearrange traffic in the central area

The other side of Nguyen Trung Truc bridge, about 300 m from Dinh Cau Temple is the fishing port and Duong Dong market - the largest market in Phu Quoc. Fishing boats come here, fishermen selling fresh fish caught at the market 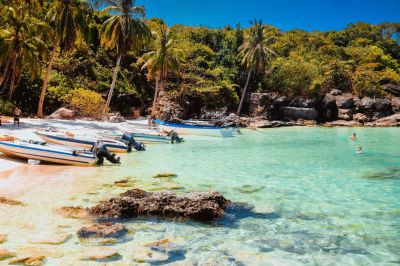 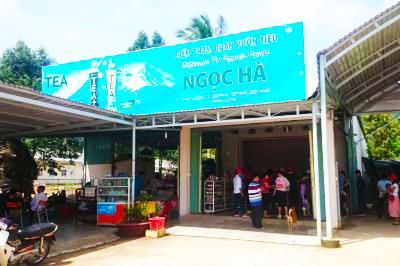